Boeing has more than 12,000 commercial planes in service carrying passengers and cargo. Its strong portfolio includes the 737 family, 747 family, 767 models, 777, and the 787 Dreamliner.

The following are Boeing’s top two aircraft that played and continue to play a huge role in making the Boeing Company what it is today.

The fact that the 737 family is Boeing Commercial Airplanes’ highest-selling plane should come as no surprise.

But not so many know that the 737 is the first commercial jetliner to exceed the 10,000-order mark achievement in 2012.

Boeing is currently working on the 737MAX, the reengineered version of the 737, which has firm orders for more than 2,294 as of September 20th, (not counting the commitments). The MAX is due to enter service in 2017. Last year 69% of total Boeing orders and deliveries where 737s.

Boeing’s backlog on the 737 ending June 30th stood at 5,237 aircraft according to Boeing’s website.

The 777, Boeing’s second highest selling airliner in the past 12 years, is extremely popular among airlines all around the world.

At present Boeing is developing the 777’s successor, dubbed the 777X, which would consume 12% less fuel compared with competing planes, with first delivery slated for 2020. 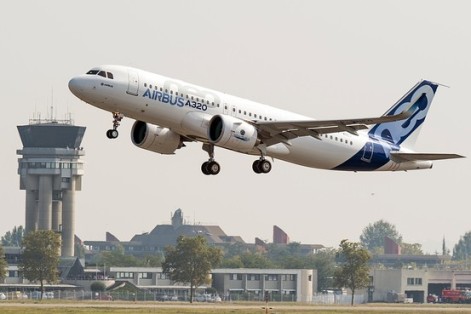 On Sept. 25, 2014 the Airbus A320neo made its maiden flight, taking off from Toulouse at just past noon central European time.

Pratt&Whitney PW 1100G-JM powered MSN6101 carried a crew of five. The type also to be available with CFM International’s new Leap engine, promises to cut fuel burn by 20% compared to standard A320s, owing to the new generation engines and aerodynamic improvements including Airbus’s sharklet wingtip extensions according to Airbus.

Airbus aims to complete the flight-test program in about 2,800 flight hours, says A320neo program senior vice  president Klaus Roewe. Around 1,600 are flown with A320neos, split evenly between PW1100G and Leap powered aircraft with the remainder being accounted for by the A319neo and A321neo derivatives.

“During the flight, which took the aircraft around southern France, the crew explored the aircraft’s flight envelope and systems operation, while the progress was monitored by experts on the ground in real time via a direct telemetry link,” adds the air framer.

The airframer is hoping to receive Chinese civil aviation authority (CAAC) approval next year to operate from the airport in western China, which is located at an altitude of 14,500ft.

Daocheng opened one year ago and could become a popular destination, Dassault believes, for its critical customer base.

“In recent years China has emerged as one of the biggest aviation markets, and the Falcon line, led by the 7X, has seized a commanding share of this market,” the airframer says, ”Nearly 30 Falcon 7Xs are flying in the country, making China the second-largest market for the long range trijet after the USA.”

The approval will also pave the way for the 7X to take-off and land at elevations up to 15,000ft.

On September 28th Etihad Airways unveiled its first Boeing 787-9 in its new livery, and will deploy the aircraft on revenue service from December 1.

The aircraft, registered A6-BLA,will be formally delivered to Etihad in December. The airline had earlier the same week showed off the new livery on its first Airbus A380 in Hamburg, but Etihad says the 787-9 will be the first to operate with the new livery on revenue flights.

Dusseldorf and Doha will be the first Etihad destinations to be served with the 787-9 from Abu Dhabi followed by Washington Dulles and Mumbai in the first quarter 2015. From June,   , Etihad will operate the 787-9 to Brisbane and Moscow.

“With the economics of the aircraft, the 787-9 will be one that will be very, central to our flying and future expansion,” says Etihad chief commercial officer Peter Baumgartner at the 787-9 livery unveiling at Boeing’s facilities in Everett, Washington.

Europe’s biggest tour operator, TUI Travel, and majority owner TUI have agreed to the terms of a merger, creating the world’s largest leisure and tourism group with a combined value of 6.5 billion Euros (USD $8.42 billion).

Investors have long expected a tie-up between the two since TUI Travel was created in 2007 from the merger of Britain’s First Choice and TUI’s travel business, which now owns around 55 percent of the London-listed firm.

The two confirmed that the deal would result in potential cost savings as they cut overlapping functions and delist shares from Germany, plus a tax benefit. 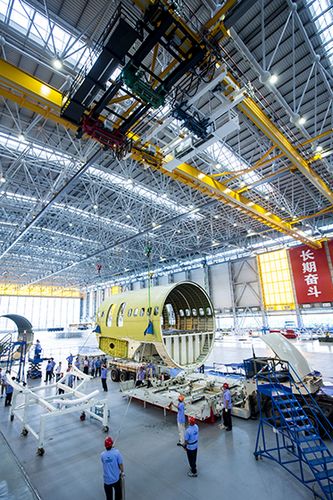 Airframe butt joint of the first C919 aircraft was officially started at the newly established Manufacturing and Final Assembly Center of Commercial Aircraft Corporation of China, Ltd (COMAC) on September 19th, and butt joint of forward fuselage and mid fuselage was started in accordance with defined assembly process and flow. This indicates a milestone in the research and development of the C919 program.

As of this writing, the forward fuselage, mid fuselage-center wing, mid-aft fuselage and aileron of the C919 aircraft have already passed the airworthiness inspection of the Civil Aviation Administration Of China(CAAC) 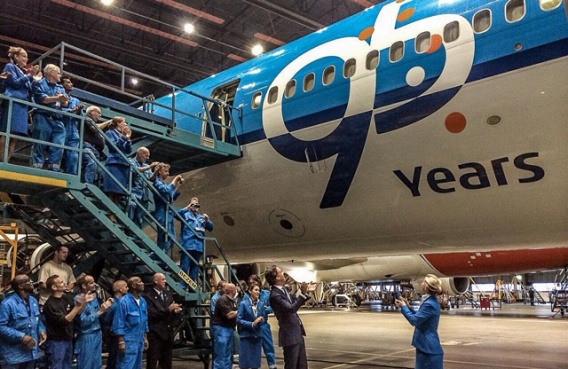 KLM Royal Dutch Airlines celebrated its 95th anniversary on October 7th with the unveiling of a special “KLM 95 Years” logo on one of its MD-11 aircraft (pictured) and laying of the first stone for a new KLM lounge at Amsterdam Schiphol Airport.

The “95” logo will also, for the duration of KLM’s anniversary, appear on one aircraft of each type in the carrier’s intercontinental fleet, where passengers flying business class during the anniversary year will receive an exclusive on-board gift of a new KLM Delftware miniature house created for the occasion.

Chief executive Camiel Eurlings, who was joined by his Schiphol group counterpart Jos Nijhuis for the ceremonies, said: “Thanks to the efforts, expertise, and energy of our 33,000 employees, KLM is now the world’s oldest still operation under its original name, and it is important that we celebrate this landmark. 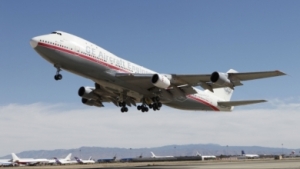 CFM International’s LEAP engine took to the skies for the first time on October 6 on a modified 747 flying test-bed at GE Aviation Flight Test Operations in Victorville, California, launching the next phase of testing for the advanced engine program.

The engine behaved well and completed multiple aeromechnical test points at various altitudes during the nearly three-hour first flight. Over the next several weeks, the engine will complete a comprehensive test schedule that will gauge engine operability, stall margin, performance, and acoustics. The LEAP 1A/-!C variants are on track for engine certification in 2015.

signing of a memorandum of understanding at July’s Farnborough air show. 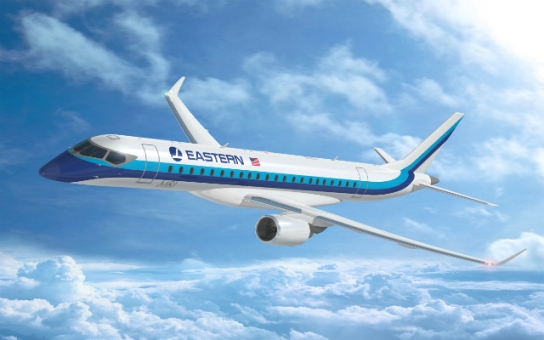 return to the air earlier in September.

allocated to UK arm Thomson Airways, having raised its overall Dreamliner order by two to 15

agreement with AVIC International Leasing and the airframer.

prices.The order was previously accounted for on Boeing’s Orders and Deliveries Web site,

attributed to an unidentified customer.

aircraft in the midsize category.

Cargolux Airlines International recently arranged the transportation of its heaviest piece ever out of Switzerland: a 48-ton-rotor intended to equip a generator in South Korea.  The massive shipment took 12 aircraft positions and required the dedicated attention of a full team of outsize specialists, including the airline’s dedicated Ground Engineering department as well as loadmasters, crane operators, truck drivers, handling agent LuxairCARGO in Luxenbourg and handling agent Asiana at the destination in Seoul.

“Carrying heavy, dense cargo is closed packages such as containers or crates requires extraordinary efforts to ensure safe on-aircraft tie-down: in forward, aft, left, right and up direction.  We can only secure the outer package and have no influnence on what happens to content when exposed to dynamic accelerations,” said Okan Akpinar, Cargolux’ countery manager, Switzerland.

“While it would have been easier for us to lash the rotor directly, we were happy to accommodate the customer’s preference for flying this huge shipment as one single piece, including the lid of the rotor.  Together with the customer, we were able to assess an adequate form-fit and force-fit inside the container; with the lashing applied to specifically designed tie-down lugs dedicated, reinforced outside locations.”

Cargolux uses a self-developed IT application to plan and calculate the correct loading and tie-down of heavy shipments, Akpinar said.

Researched and Compiled by: