On The Boeing Front

On April 16, Boeing celebrated the flyaway of the first BBJ MAX airplane, from the air-framer’s  facility in Seattle on the first stage of its journey to becoming a fully outfitted BBJ Max 8.

The plane was flown to Delaware Coastal airport. Local company Aloft AeroArchitects will now install Its PATS auxiliary fuel tank, which will boost the aircraft’s range to 6,640nm (12,230km)—some 3,000nm more than the standard Max 8, which entered service in 2017, and 800 more than the BBJ2 which it replaces.

The green BBJ Max 8 is scheduled to arrive for outfitting in the fourth quarter at Comlux Completions in Indianapolis. The finished aircraft will be handed over to its undisclosed customer in the second half of 2019.

“We are excited to see the first BBJ Max come to life and fly through the development milestone,” says Boeing Business Jets president Greg Laxton. ”In the past few weeks, the airplane has achieved factory rollout, first flight, multiple certifications, and now flyaway,” he adds.

The BBJ Max 8 was launched in 2014 as the first member of the re-engined BBJ family. This will be followed by the BBJ Max 7 and BBJ Max 9.

Airbus has conducted the maiden flight of its A350-900ULR, the heavier and longer-range variant of the twinge tailored to operate specialized long-haul routes. The initial aircraft, MSN216, departed the air-framer’s Toulouse headquarters on April 23rd.

It features three primary modifications, of which two will be applied to all new-build A350-900s.

Airbus has hiked the maximum take-off weight to 280t, and increase on the previous figure of 275t.It has also incorporated a series of aerodynamic changes which, it says, will contribute to a 1% fuel-burn saving.

These include a further slight twist of the wings taller winglet, trailing-edge extension and clean-up of the upper wing fairing. All these adaptations will become standard on the -900.

The ultra-long range-900ULR will have dedicated changes, primarily a higher fuel capacity. The center wing tank will not be increased in size but re plumbing of interior installations will provide access to another 24,000 liters ( 6,340 ) gallons of existing volume.

Airbus puts the reference range of the -900ULR at 9,700 nm compared with the standard 8,100nm of the basic -900. Singapore Airlines has ordered seven-900ULRs and is set to take delivery of the first -900ULR this year, although Airbus declines to narrow the handover window beyond a second-half timeframe.

The first A350-900 ULR) for Singapore Airlines has been revealed in the Airline’s livery following completion of painting in Toulouse.

The aircraft is now set to move to the next stages of production, including the installation of engines and cabin furnishing, before starting ground and flight tests.

The Aircraft is scheduled for delivery to Singapore Airlines after all the testing is completed.

Pilatus plans to deliver 23 of the super tight business jets in 2018, from an order backlog of 84.

Western Aircraft says it has seen strong demand for the PC-24, ”With more than a dozen offers to buy the first aircraft”. Despite the demand Western plans the second aircraft to its inventory, where it will be used for ad hoc charter and for the coming year as a Company demonstrator.

PlaneSense, one of Pilates’s largest customers, has an order for six PC-24s, but is keen to acquire additional aircraft to bolster its fleet of 36 PC-12s.

American Airlines has ordered 15 Bombardier CRJ900s and 15 Embraer E175 regional jets, deals with a combined list price value of roughly $1.4 billion.  Deliveries of the CRJ900s with 76 seats to American Subsidiary PSA Airlines will begin in the second quarter of 2019 according to Bombardier media release.

The Bombardier commitment, including an additional 15 CRJ900 options, has a value at list prices of $719 million. Bombardier stated that the aircraft will be outfitted with the Company’s new “Atmosphere” cabin, which includes overhead bins that can accommodate large roller bags.

Embraer will deliver the 15 E175s with 76 seats to American Subsidiary Envoy from March 2019 to November 2019, the manufacturer says.

ANA Unveils the Features of The New Airbus A380s

All Nippon Airways (ANA) three A380s will be exclusively introduced to the Tokyo-Honolulu service and each cabin is specially designed to meet the passenger’s needs on this route.

Honolulu is loved by many Japanese families, couples, newlyweds and Hawaii is a popular destination for their vacations and honeymoons. With this in mind, ANA aims to make their experience onboard more comfortable by strategically designing the cabin features in order to meet their unique needs while providing them with a once in a lifetime experience. 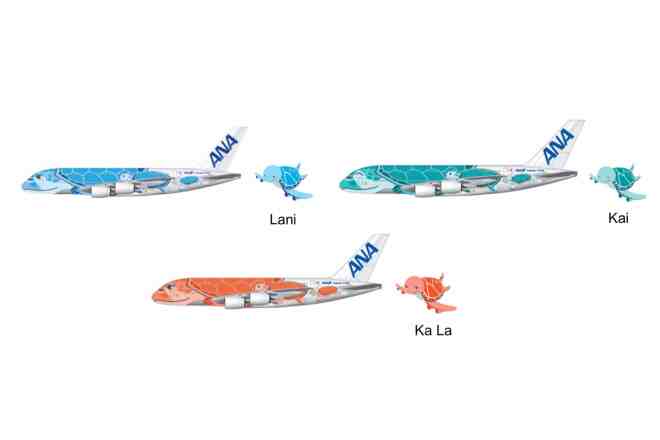 In March 2017, ANA announced the special livery motif FLYING HONU. At the time, the design ANA introduced was blue, an homage to the Hawaiian blue sky.

Since then ANA announced two more colors, green and orange. The emerald green is inspired by the crystal clear waters of the Hawaiian ocean and orange is a reference to the beautiful Hawaiian sunset.

The Cabin interiors have also been strategically designed in order for the passengers to feel the spirit of Hawaii from the moment they board the aircraft.

The walls and lights have been arranged in such a way as to illustrate Hawaii’s enviable blue skies, sunrises, sunsets, night skies and iconic rainbows.

Air Italy has unveiled the first aircraft featuring its new livery. The first 737 Max 8 has been painted with the scheme, which incorporates the maroon shade prominent in the branding of shareholder Qatar Airways.

Air Italy, formerly Meridiana, had only previously shown the livery as a digital mock up.

In March, the full-service carrier announced that it would be adding five A330-200s and three 737 Max 8’s to its fleet as the summer season commences.

The aircraft are being leased from 49% shareholder Qatar Airways as Air Italy embarks on a rapid short-and long-haul expansion program with Milan Malpensa as its focus.

Flights under the new brand name commenced on March 1st, operated with 737s and Boeing 767s still bearing Meridiana’s livery. Those aircraft will be phased out as the A330s and 737 Max 8’s enter the fleet.

In May 2019, the airline is set to begin receiving Boeing 787s, also leased from Qatar Airways. Air Italy will have a fleet 50 aircraft by 2022.

A period of good economic conditions has led to complacency among low-cost carriers that is ripe for a “correction”, in the view of former EasyJet chief executive Ray Webster.

Speaking at the Routes Europe conference in Bilbao on April 23, Webster—who was chief executive of EasyJet between 1996 and 2006—said that outlook for low-cost airlines was “quite worrying” as they were unprepared for future economic shocks.

A period of “very good” economic conditions has been punctuated by the lack of a “serious downturn or runaway fuel prices”, he states.

As a result, carriers have not been put under”pressure” and so have “incrementally added Costs” and lost efficiencies over time, while not experiencing the typical “ Peaks and troughs” of the market.

Webster forecasts that oil producers could raise prices, which would have a “dramatic” impact on airline bottom lines.

On April 19th Boeing announced the delivery of the first 737-800 Boeing Converted Freighter(BCF) to GE Capital Aviation Services (GECAS) and the freighter will be operated by West Atlantic Group, based in Sweden.

West Atlantic will receive four 737-800 Converted Freighters within the next 11 months, once delivered, the company will operate 23 Boeing 737 freighter aircraft. 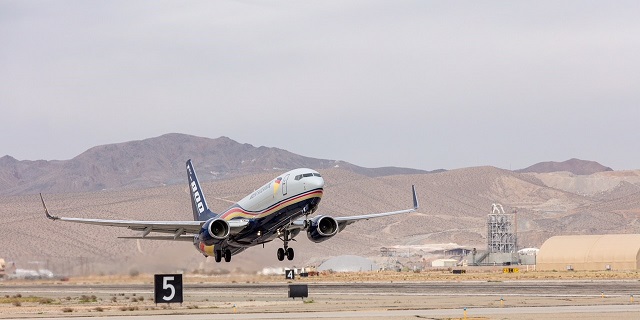 “We are very proud to be the launch customer for the 737-800BCF, and pleased to supply this inaugural aircraft to West Atlantic,” said Richard Greener, GECAS’ Senior Vice President & Manager, Cargo Aircraft Group”.

Boeing has received 45 orders and commitments, from seven customers including: YTO Airlines, based in Hangzhou, China; China Postal Airlines based in Beijing, China: GECAS, based in Ireland; Air Algeria, based in Algiers, Algeria; LAS Cargo, based in Bogota, Columbia; Cargo Air, based in Sophia, Bulgaria; and an unannounced customer.

In April of this year Brazil Cargo carrier and motorcycle maker Harley-Davidson entered into a partnership that will help bikers get their motorcycles faster.

Harley plans to increase output at its Manaus-area factory and use Modern Logistics’ road and airfreight network to transport bikes to 21 Brazilian dealerships.

The new bikes will be flown to Brasilia or Viacopos, and then trucked the rest of the way, reducing average delivery times by four days.

GE aviation, Pratt& Whitney and Rolls-Royce have expressed overall satisfaction with their new-generation engine programs despite some growing pains related to entry-into-service phase and the transition from older programs to newer ones.

In a panel on new engine programs held at the event on May 2, Paul Finklestein, marketing director at Pratt & Whitney, acknowleged the struggles encountered by Pratt & Whitney on the PW1100G greed turbofan(GTF) program over the past few years.

Currently in operation on around 150 aircraft comprised of Airbusa320neo, Bombardier Series and as of early-May, Embraer E190-E2 aircraft Finklestein said the modifications have smoothed over some of the challenges with the engine program.

Meanwhile, Brian Ovigton, engine services marketing director at GE Aviation, said the OEM experienced a relatively smooth entry-into-service (EIS) of its new engine type—the CFM LEAP family for the 737 MAX and the A320 new narrow bodies and the GEnx, an option for the 787 and the 747-8.Both engines have yet to experience AOG incidents, he said.

Alastair Knox, head of aircraft transitions at Rolls-Royce, said the British engine makers “very pleased” with the results of the Trent XWB, found on the Airbus A350 aircraft and the Trent 1000 powering the Boeing 787.

Despite Rolls-Royce’s satisfaction with new engine types, Knox said there are some challenges to consider dependent on the size of the carrier awaiting new models to enter their fleets.