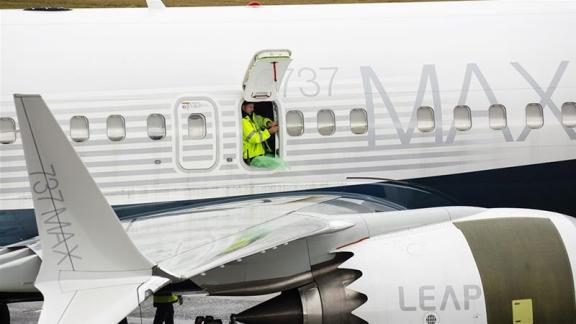 Amid signs that Boeing is hoping to resume production of the 737 MAX in May, the company says flight tests of the three current versions of the model, the -7 -8 and -9, are continuing despite the general shutdown of its Puget Sound facilities because of the coronavirus.

Although production of all aircraft has been temporarily halted across its northwest facilities, Boeing is still working to finalize changes to the maneuvering characteristics augmentation system (MCAS) flight control law in the MAX.

To evaluate the changes to the MAX, Boeing is conducting a flight test program called ”operate like an airline”, which closely resembles the function and reliability flights the company runs as a standard part of pre entry-into service checks for all new models.” We have been working with regulators to appropriately address all certification requirements and safely return the 737 MAX to service.  This includes operating flights of 737MAX 7, -8 and -9 aircraft to extend testing capacity and ensure a more complete representation of our customer’s diverse fleets and operations,” Boeing said.

On March 25, as part of the program, a 737-8 intended for eventual delivery to Southwest Airlines, was operated from Boeing Field to Spokane, Washington, while a 737-9 built for Alaska Airlines was flown from Seattle to Moses Lake.

“In each of the cases, a small test team on board exercised short-and long-haul engineering flights that will help satisfy specific test conditions for updated software. These are not certification flights,” the company added.

Boeing Wins $1.5bn Contract for 18 P8A Poseidons for South Korea, New Zealand and the US Navy 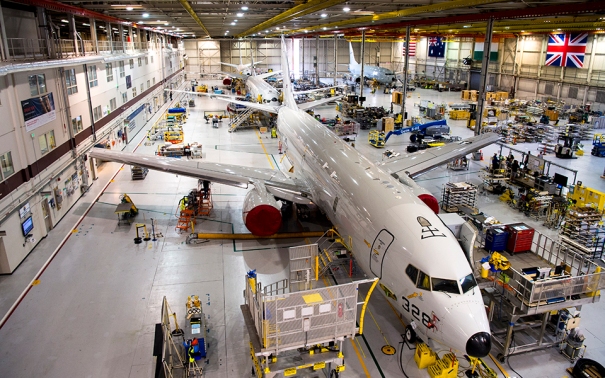 The US Navy (USN) has awarded Boeing a $1.5 billion contract for 18 P-8A Poseidon maritime patrol aircraft.

New Zealand and South Korea are scheduled to receive their first aircraft in 2022 and 2023, respectively.

The P-8 is based on the commercial 737-800. However the jet’s airframe has been ruggedized, a bomb bay has been installed to drop torpedoes and its wings have pylons for weapons such as a Harpoon anti-ship missiles.  The aircraft can also carry up to 129 sonobuoys.

The aircraft is primarily operated by the USN, which plans to order 117 examples in total to replace its aging fleet of Lockheed P-3C Orion maritime patrol aircraft.

Other operators include the UK, Australia, India and Norway.

In January of this year, the USN said in a request for information that it is interested in expanding the capabilities of the P-8A to include the ability to carry new anti-ship cruise missiles, bombs, sea mines and decoys. 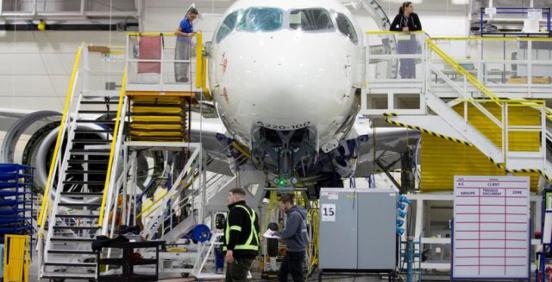 Europe’s Airbus is grappling with labor and supply chain shortages and may only be able to restore aircraft production to some 10-20% of normal levels for now; because of partial shutdowns, industry and union sources said.

Worst affected are wide-body jets, demand for which is expected to come under pressure as the coronavirus crisis hits airlines worldwide, especially in the long haul Asia market.

The European plane maker, whose factories are spread across Europe, restored output at French and Spanish plants a week ago after a four-day shutdown.  On Monday, March 30, it announced a new closure of Spanish plants that make tail sections of Airbus jets.

Airbus said it would suspend most production in Spain until April 9 after the Madrid government tightened the Corona virus lockdown.  It has also said British and German wings production and assembly would stop for three weeks.

Especially badly hit are the tier-two and tier-three suppliers, which are sub-contractors to larger companies that deal directly with Airbus or its U.S rival Boeing.

France’s Safran, the world’s third largest aero supplier, said it continued to deliver engines to Airbus and had enough parts for 2-to-3 weeks, but its chief executive noted some problems further down its supply chain.

Airbus is also finding it difficult to make deliveries because of logistics of getting foreign pilots to France or Germany and the reluctance of many airlines to take aircraft as they face liquidity problems, industry sources said.

Even such as finding hotels are said to be a problem, forcing Airbus to look at using its own hotel and restaurant in its in-house academy known as Airbus University. 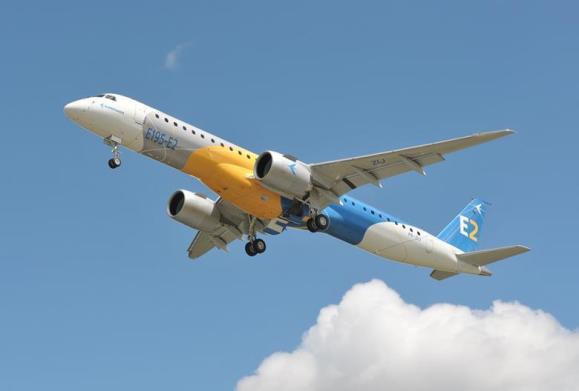 Brazilian aircraft manufacturer Embraer says it has not had any order cancellations as a result of the current global coronavirus pandemic that has decimated the air transport industry.  However, it is seeing some customers ask for deferments of deliveries as airlines reduce capacity for an undetermined period.

“The discussion is dynamic,” says chief financial officer Antonio Carlos Garcia, who was named to his post in November and began in January. “All these discussions are regarding the delivery schedule, but no cancellations. The situation is really changing, we need to know for how long the capacity reductions will last in order to have an accurate assessment.”

Embraer’s revenues for the full year rose 9% to $5.5 billion, up from $5.0 billion in 2019.  The company reported an adjusted net loss of $218 million, more than three times that of a year earlier, as it took special charges and impairment costs, as well as costs in relation to the carve-out of its commercial division in preparation of a merger with Boeing.

The Company ended the year with a backlog of $16.8 billion, and says it received 60 new firm orders during the year from the likes of American Airlines, KLM, Azul and United Airlines.  Its new generation E2 jet backlog reached 153 firm orders and more than 570 commitments.

Chief executive Francisco Gomes Neto says that Embraer completed the carve-out of its commercial division in January, in anticipation of its planned merger with Boeing, which is expected to close later this year.  The transaction has been tied up in regulatory red tape in Europe and executives now expect it to take longer than the original June completion date.

The European Commission’s in-depth review of the deal was prompted by concerns in the single- aisle aircraft market, particularly the 100-150 seat segment.  Recent trade squabbles between the United States and the European Union could also delay the transaction’s closing. 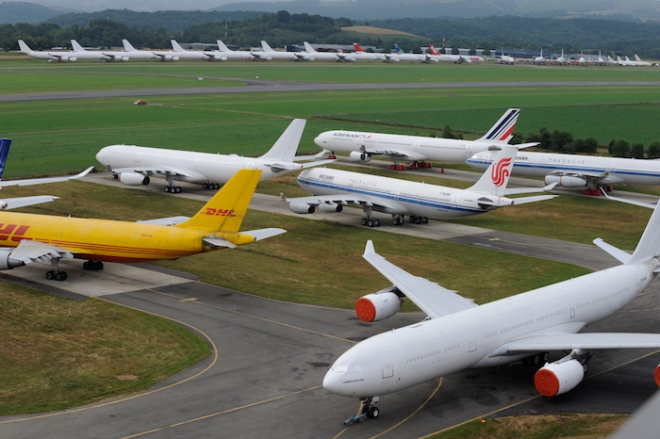 After having been thought for a few days to be on a strong upward curve, demand for aircraft storage during the COVID-19 crisis is still unstable, according to specialist Tarmac Aerosave.

“Stabilization is underway, but the situation is fluid,” company CEO Patrick Lecer said. Tarmac Aerosave has been freeing storage space at its sites in Tarbes and Toulouse Francazal, France, as well as in Teruel, Spain.But customer interest is lower than expected to materialize, Lecer noted.

“We have seen a lot of requests’ lot of back and forth, a lot of uncertainties among customers,” he said.  And at times, carriers are realizing their needs are changing, Lecer explained.

“Overall, demand is for short term storage,” Lecer said. Tarmec has currently 170 aircraft in storage, up from 140-150 before the crisis.

The company has increased the available space available to 230-250 aircraft depending on their size—a 20% expansion.”  We have rearranged some areas to be ready if demand actually grows,” Lecer said.

German airline group Lufthansa said it was permanently removing some of its large aircraft from service and reducing capacity for the long term. They are saying it will take years for demand for air travel to return to levels before the coronavirus pandemic.

The company said in a statement on Tuesday, April 7th, that it was retiring six Airbus A-380s, five 747-400s and seven A340-600 aircraft, a step that anticipates less traffic long term at its Frankfurt and Munich hubs in Germany.

The company was unable to say what eventually would happen to the planes given lack of demand for the aircraft at the moment; but it was clear they would notify for Lufthansa again.

At the same time Lufthansa will close its Germanwings low-cost airline as part of a broader overhaul including capacity cuts across the group, which also owns the Austrian Airlines, Swiss and Eurowings brands.

KLM Royal Dutch Airlines operated its last revenue flight, FLT KL686 from Mexico City to Amsterdam; it was operated with 747-400 PH-BFW on March 29.

The Boeing 747 was the queen of the KLM long-haul fleet.

Qantas Airways, due to the coronavirus and sudden downturn in travel, has decided to early retire its remaining Boeing 747-400ER.  Previously it was planning to retire the type in February 2021.

El Al Israel Airlines completed its longest-ever flight   -17 hours and 15 minutes- between Melbourne and Tel Aviv.  It carried 280 Israelis stranded in Australia during the Covid-19 pandemic and wanting to come home.  The Outward journey had taken 16 hours and 30 minutes.  The crew of 19, which included 8 pilots, did not leave the plane in Australia.

Any Israelis already holding an El Al ticket back to Israel were allowed to board for free, otherwise the fare was $2,480.

El Al had already planned to launch regular commercial flights between Tel Aviv and Melbourne , starting with a series of trial flights starting April 2.  But those plans have been put on hold due to the crisis. 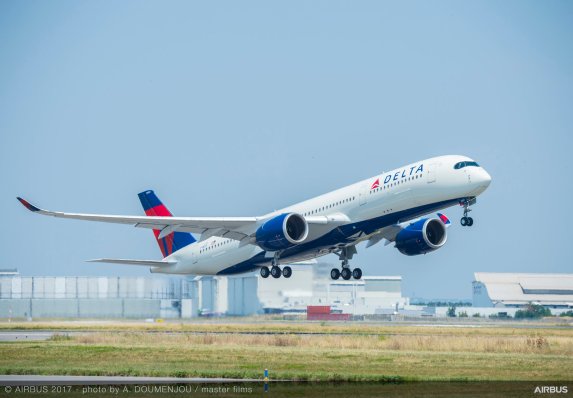 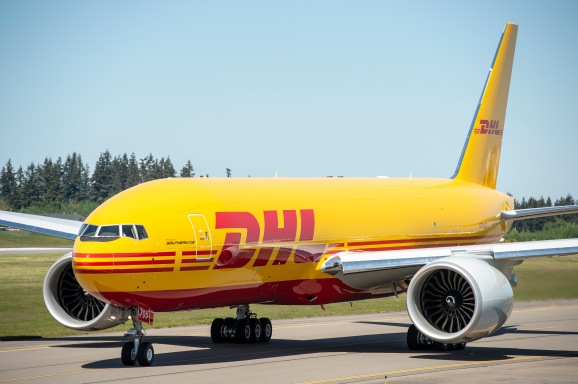 International courier company DUL Express has received the first of six new Boeing 777-200 LRF freighters scheduled for delivery this year as it ramps up capabilities to serve the rapidly growing e-commerce market.

The new aircraft arrived at Cincinnati/Northern Kentucky International Airport(CVG), home to DHL’s U.S. operations, the company said Monday March 23 in a press release.  The new freighter will be operated by partner airline Kalitta Air on behalf of DHL aviation.

DHL ordered 14 777-200LRFs in 2018, with four delivered last year and another four coming in 2021 as part of fleet renewal to equip the fleet with more modern, fuel-efficient aircraft.  The Boeing 777-200LRF has the longest range—5,717 miles—at full payload (102 tons) of any wide body freighter and reduces emissions by 18%, compared with aircraft it is replacing.

DHL’s capital expenditure for the 777-LRFs is $4.7billion at list prices, according to Boeing; but airlines typically receive discounts for multi-plane purchases.  The order doubles DHL’s 777 Fleet. 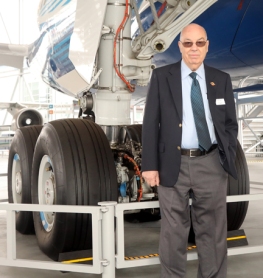