Boeing remains committed to achieving $50 billion in annual aircraft services revenue by around 2027.  It is part of a broader aim by the company to control more of the commercial aviation ecosystem.

“We did set a big, audacious target,” Boeing chief executive Dennis Muilenburg, says during an investor conference hosted by AllianceBernstein on May 29.  “That target has not changed.” “Admittedly it’s a high-bar target.  We think it’s achievable target,” he adds.

Muilenburg set the $50 billion benchmark in late 2016 when the company merged all its aircraft services work into a new dedicated services unit called Boeing Global Services.  The division generated $17 billion in revenue in 2018, up 17% in one year—gains partly reflecting acquisitions like that of parts supplier KLX Inc.

The $50 billion mark remains a stretch, but Muilenburg thinks Boeing can sell more products and services related to aircraft maintenance, modifications, parts, training and software—“things that apply to the brains of our airplanes”.  He calls Boeing’s services expansion an effort to boost”lifecycle value”—meaning the revenue Boeing can earn over the course of an aircraft’s life.

“Investments to grow the services business will continue to be our primary fuel for growth,” he says.  “We do see some opportunity for targeted acquisitions.  But I see those as bolt-on complementary acquisitions rather than large scale acquisitions.

Airbus Establishes Airbus Canada to Market the A220

The change of name of the C Series Aircraft limited Partnership(CSALP) announced in March 2019 to Airbus Canada limited took effect on June 1, 2019.

The new name reflects the majority interest of Airbus in partnership since July 1, 2018.  The partnership is adopting the Airbus logo as its single visual identity.

Over the course of the coming weeks, the new name will be applied to the limited partnership’s documentation, materials and branded items.  The Airbus and Bombardier logos will continue to be displayed side-by-side on the building exteriors in Mirabel, reflecting production activities on the site for both the Airbus A220 and Bombardier CRJ aircraft families.

Headquartered in Mirabel, the limited partnership carries responsibility for the development and manufacture of the Airbus A220 family.  Majority owned by Airbus, the entirety includes Bombardier and government controlled agency Investment Quebec and employs some 2,200 people.

Plans call for a second manufacturing facility, located in Mobile, Alabama, to start production in the third quarter of this year.

Daher Has Secured European Certification for the TBM 940 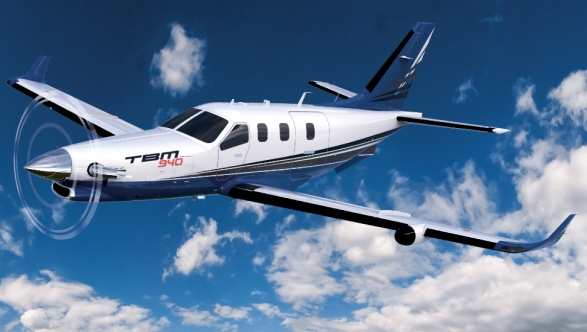 Daher has secured European certification of the TBM 940, nine weeks after launching the latest variant of its 29-year-old single-engined turboprop.  An update to European Union Aviation Agency type certification data shows the approval was achieved on May 10.

Priced at $ 4.13 million, the TBM 940 replaces the flagship 930 introduced in 2016 and incorporates a host of new features including an auto throttle, increased automation for the de-icing system and redesigned and updated interior.

French airframes Daher says the TBM 940’s auto throttle is the first to be installed on a single-engined turboprop weighing less than 12,500lb (5,675kg) and is designed to adjust the aircraft’s speeds based on the present flight profile.

The auto throttle also allows the six-seat aircraft to be operated at the edge of approved power regimes for its Pratt & Whitney Canada PT6A-66D.

The TBM 940 sits above the TBM910 as the baseline model since its launch in 1990.  12 variants of the high-speed aircraft have been produced and around 950 examples delivered globally.

Chinese start-up Genghis Khan Airlines took delivery of its second Comac ARJ21-700 on June 4th, ahead of its planned launch date in early July.  Based in Inner Mongolia, the newly established carrier becomes the second operator of the type, after Chengdu Airlines, and the first to commit to operating solely of the Chinese-made regional jet.

On June 4th, Genghis Khan commenced verification test flights with its first ARJ21, flying between its base at Hohhot Baita International Airport, located in inner Mongolia’s far north. The carrier carried out two emergency evacuation simulations earlier in the day including a lithium battery fire and an engine failure during take off.  The carrier plans to compete a total of 25 verification test flights as part of its certification process over the next coming weeks.

Genghis Khan took delivery of its first ARJ21-700 on February 22.  A rebrand from the formerly known Tianjiao Airlines, the Chinese carrier shelved initial plans to operate fleet of Bombardier CRJ900s after inking an agreement covering 50 ARJ21s (25 firm orders and 25 options) in August 2018.

Genghis Khan expects to take delivery of two more ARJ21s this year, plans call for a fleet of 25 jets, powered by General Electric CF34-10A engines, to operate to 40 destinations within five years.

Despite mounting political pressure to raise the country’s profile as global aerospace contender, China’s first indigenous airliner as failed to gain traction in its home market.  To date, launch customer Chengdu Airlines remains the sole operator of the Comac regional jet, operating a fleet of 11 ARJ21s to 20 Chinese cities.

Lebanon’s Middle East Airlines (MEA) expects to acquire up to 14 replacement aircraft and increase its fleet size to 20 aircraft by 2021.  It is working to overcome serious competitive disadvantages posed by its hub’s open skies policy, explained the airline’s head of commercial strategy and alliances, Walid Abillama.

“Our open skies policy is actually very unfair for us,” he told AIN during an interview at MEA’s headquarters at Beirut’s Rafic Hariri International Airport.

“Other carriers are free to add capacity.  If we ask to increase frequencies, they complain that they are not able to get slots.  When an airline comes to your base, you cannot take advantage of their network.  The Gulf carriers are the biggest in the world.  We are a minority at Beirut.  We have only 35 percent market share.”

Referring to traffic, originating from the UAE into Beirut, Abillama said Emirates operates three 777s a day, FlyDubai two flights a day and Etihad another two for total of seven.  ”We operate three flights a day to Dubai and one to Abu Dhabi,” he noted. “That’s seven for them and four for us.  Turkish Airlines operates four flights, Pegasus two and Atlas Jet one.  We have two flights away to Turkey.  Saudi Arabia is a similar situation.”

Although MEA does not offer flight to North America, Abillama noted a thriving business in Lebanese passengers traveling to and from the U.S., MEA maintains

What Abillama called “special pro-rate agreements” with U.S. carriers United, American and Delta.  ”We give them tickets on MEA flights, and they sell our seats,” he said “We compete in North America without flying there.

Addressing premature blade deterioration of Trent 1000s ranks as Rolls-Royce’s “ single most important issue,” acknowledges the aero engine company. They profess “deep regret” for the distraction to customer operations and the resulting groundings that cost the UK manufacturer some about $540 million last year.

Dominic Horwood, the company’s civil-aerospace chief customer officer, called the “significant” disruption to customers “absolutely unacceptable to them and to us”.  He stressed the importance of providing support by returning engines to operators.

Rolls-Royce added it has become “more responsive in turning engines around” and hopes to see single-digit numbers of aircraft on the ground(AOG) by the end of 2019.

Horwood said the company “respects” Air New Zealand’s decision to choose General Electric GEnx power plants for a new batch of Boeing 787-10s over the incumbent Trent 100s that power its 787-9 fleet. “They are still an important customer to us,” he remarked.  “The way we support customers is how we will be remembered.”

The official went to pains to emphasize that the blade-deterioration resulted from design issue specific to the Trent 1000 at the “component level”and does not apply to other Tent-Family variants.

Horwood said the manufacturer, which claims good progress in introducing technical fixes, never stops learning.  The lessons reside very much in detail design of components and an understanding of what can cause deterioration in service.  ”Once we have done that, then it is easy to apply on new engines’’, he explained.  ”This is not about mistakes, but apply lessons we are applying that learning in the UltraFan future-technology program.”

Air Premia is planning to use its new Boeing 787-9 Dreamliner on the Seoul Tokyo-Los Angeles route starting in 2021 according to Forbes.  This will be the first long-haul route for the new carrier.

Funding for Air Premia went to venture capitalists and financial institutions, with no shareholder so far having more than 20%, according to a spokesperson.

Whereas start-up airlines often often have only a few investors, Air Premia in January stated it has seven public investors. Series B funding raised $147 million, and Air Premia aims at profitability within three years.

One shareholder is Hong Sung Bum, the founder of Hugel, a pharmaceutical company that manufactures Botox.  An Air Premia spokesperson said Hong wanted to diversify into new businesses.

Air Premia does not intend to operate to operate narrowbody aircraft, and nor will fly domestically-a first for a Korean airline.

Initially Air Premia will fly regionally within Asia.  Its first three 787-9s are leased from Air Lease and arrive in July, September and November 2020.

Atlas Air Worldwide Holdings, which has had a long-standing ACMi lease agreement with Qantas Freight for the operation of two 747-400 freighters, said in a statement that the leased aircraft will be updated to two 747-8Fs.

Both 747-400s operate in Atlas Air Livery rather than Qantas livery, having flown trans-Pacific routes connecting Australia, Asia and North America.  According to Atlas’ statement both -8Fs will operate the same routes beginning late next month.

According to Atlas, the 8Fs will begin operating for Qantas once existing agreement with another Atlas customer expires, while the -400Fs operating now for Qantas will go to the ACMI for another customer.

Boeing to Supply Airbus A320 Parts to British Airways

“We’re very excited about this,” BA’s chief financial officer Steve Gunning told reporters at the Paris Air Show.  ”To have all of BA’s A320 and A320neo family covered by this arrangement is a great way forward.”

He added: “We went through a very rigorous process.  We know Boeing will bring a wealth of experience and it enables us to really focus on our core operation.

Boeing Global Services chief executive Stan Deal said that the manufacturer was”happy to put our hat in the ring” to offer BA “more choice.”  In addition, the carrier has signed an agreement for three landing gear exchanges for its 777-300ERs.  Through the program, operators receive an overhauled and certified landing gear from an exchange pool maintained by Boeing.

The latter deal comes four months after IAG agreed to buy as many as 42 of the 777X wide body aircraft to replace BA’s aging fleet of 747s.  It has ordered 18 777-9s and took options for an additional 24.