Boeing’s 777-9 is meeting performance expectations and the company still expects to begin delivering the jets in late 2023, despite repeated delays and close scrutiny by regulators.

The 777-9 makes its international debut at the Dubai air show; the flight test airplane made a nearly 15-hour nonstop flight from Seattle’s Boeing Field to Dubai. It was the first international flight and longest flight to date for the 777X as it continues to undergo a rigorous test program.

“The airplane is performing well and in-line with our customer commitments,” Boeing chief executive David Calhoun said on October 27. “We will validate these results. Nothing at this moment in time… has suggested that the 777-9 plan isn’t workable,” he adds.

Boeing’s late-2023 timeline reflects the federal Aviation Administration’s closer review of the jet, which has already included what Calhoun calls “pauses”. He says the PAA has taken the position of ”Boeing, get your house in order before we run this test.”

Boeing remains confident on the current timeline of its 777X. The four-aircraft 777x fleet has now accumulated 1,700h across 600 flights and is “doing well and seeing it performing as predicted”, says pre-Dubai air show briefing Ihssane Mounir, senior vice president for commercial sales and marketing.

Separately, Calhoun says Boeing is “evaluating the timing of launching a freighter version of the 777X”, though he provided no details.

A380 Reprieve Would Have Worsened Airbus Pandemic Strain: Faury

Airbus chief executive Guillaume Faury believes the airframes’s pandemic-related predicament over the last 18 months would have been far worse had it not independently opted to terminate the A380 program.

Emirates has become the latest to scrap early-delivery aircraft, after tying up with a recycling firm to assist with dismantling its first A380. The jet was delivered in July 2008. Initial aircraft for Singapore Airlines and Air France have also been broken up.

Airbus halted the A380 program in February 2019, one of the final acts of Faury’s predecessor Tom Enders, after Emirates – which was single-handedly keeping the program afloat – slashed its backlog for the type.

“Honestly, with the benefit of hindsight and it’s always easier to be smart afterwards, we stopped it ahead of Covid, and it was really the right thing to do,” Faury tells FlightGlobal.  “We’d have been in much more difficult spot with the A380 still in full swing in the midst of Covid.”

“I think what was important for the Airbus decision to terminate the A380 was size of the market for that product and the evolution of technology that gives an edge to the long-range twin-engined wide body,” says Faury.

Gulfstream officials “have looked long and hard to find the right place to build” such a facility, Gulf Stream president Mark Burns said during an announcement on Tuesday November 9th.

A more than $70 million investment, the new service center will create more than 200 jobs and expand Gulfstream’s MRO capabilities in the western U.S. It follows recent company-owned service center expansions in Savannah; Van Nuys, California; Forth Worth, Texas: Palm Beach, Florida; Appleton, Wisconsin; and Farnborough, England. The Mesa facility is expected to open in 2023.

The company is working with the airport authority to use green power from the airport’s electrical utility, in addition to installing solar panels. ”In the past decades our fleet has grown, we have invested to create a network of modern facilities to provide customers with outstanding service and support when and where they need it,” said Burns. 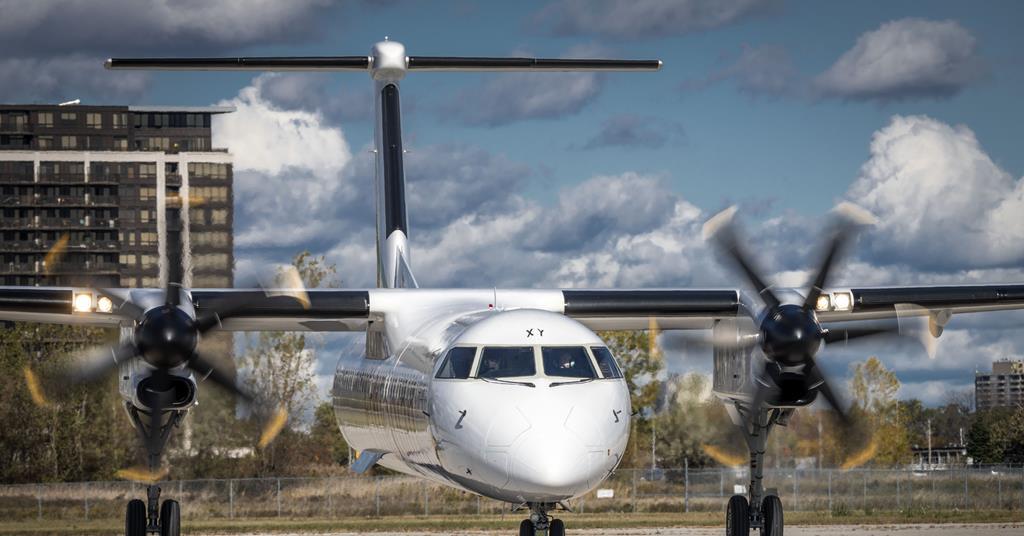 The Company still intends to move forward with previously announced plan to shatter its Dash 8 manufacturing facility in Toronto, then restart production at a different site when market conditions improve, De Havilland said on November 8th.

The company has restarted the work of “ completing aircraft currently under production”, it says. The restart comes after members of union UNFor ratified a contract on October 26.

Workers at De Havilland’s site in the Downview section of Toronto started striking in July, a move the union attributed partly to job uncertainty.

De Havilland’s parent acquired the Dash 8 operation from Bombardier in 2019, but De Havilland’s lease at the site is set to expire this year. Earlier this year, citing the pandemic, De Havilland said it would stop Dash 8-400 production after existing orders are filled. That process is now starting.

The Company aims to resume new aircraft production at a new site at the earliest possible time, subject to market demand the company adds. 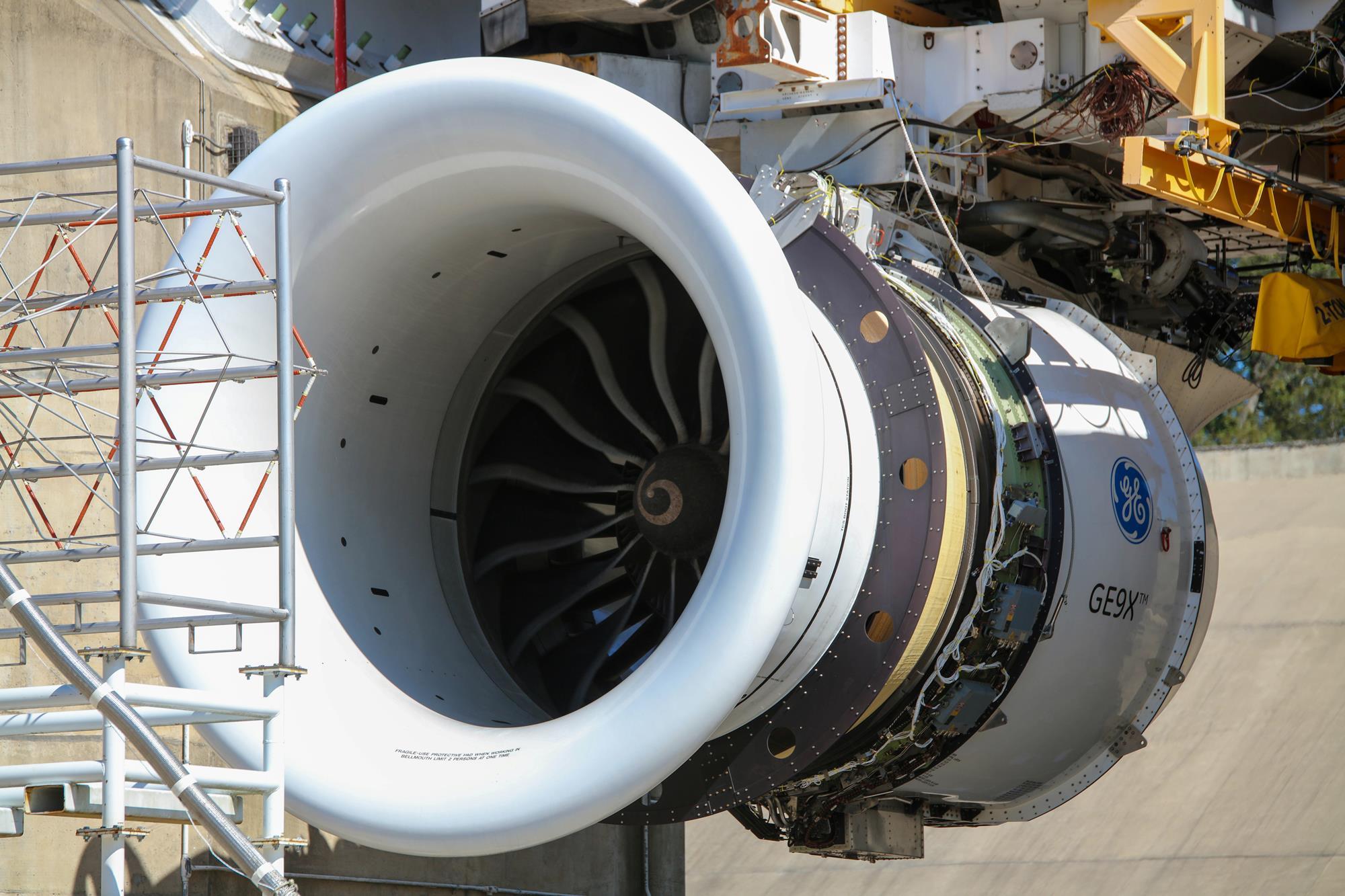 GE Aviation has completed dust-ingestion testing on its new GE9X engine for the Boeing 777X, as the propulsion specialist eyes a potential third application for the wide body turbofan.

Performed at the manufacturer’s facility in Peebles, Ohio, the trial saw the 110,000lb – thrust-class power plant run for a total of 1,600 cycles while a stream of dust particles was injected into the engine.

“We really put it to the test,”says Karl Sheldon, program manager for the GE9X. But borescope inspections of the turbofan after 1,500 cycles”looked really good”, particularly the hot section”. “That is why we were able to extend the test for a 100 cycles beyond what we had planned.”

A full module and component tear-down will be performed over the coming weeks to verify the initial findings, he adds, with the results available in early 2022.

GE obtained US certification  for the GE9X in September 2020 and Sheldon says the next step is a 3,000-cycle ETOPS test at Peebles which should complete in the first half of next year.

In addition, the company continues to work towards european certification for the engine; Sheldon anticipates the milestone in late this year or early next year.

Further out, he sees the likely application for the GE9X on a freighter version of the 777X.

Meanwhile, GE is still waiting for the exact specifications from Boeing for the smaller but longer-range-8 variant of the 777X before defining the exact thrust requirements for the GE9X on that aircraft, says Sheldon. 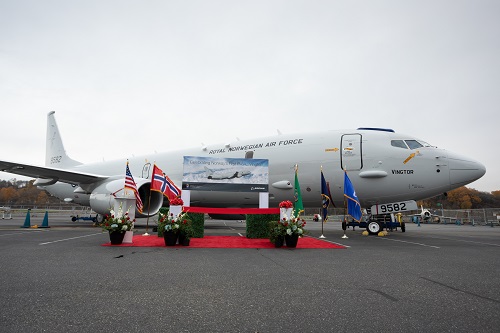 P-8As are submarine-and ship-hunting aircraft that carry a small arsenal of torpedoes, anti-ship missiles and radar for tracking targets.

“Norway is responsible for large maritime areas in a strategically important part of the world, and the new P-8A Poseidon will represent a tremendous improvement in our ability to both protect our sovereignty and understand developments in these areas,” says Matte Sorfonden, director general of the Norwegian Defense Material Agency.

The P-8A has a 737-800 fuselage mated with a 737-900ER wing. Boeing says the aircraft has 86% parts commonality with Commercial 737NGs. Borrowing from the airliner’s supply chain helps keep a lid on support costs.

Many navies and air forces are replacing aging turboprop Lockheed Martin P-3C Orion maritime patrol aircraft with P-8As. In the case of Norway, five Poseidons will replace its fleet of six P-3 Orions and two Dassault DA-20 Jet Falcons.  Boeing says Norway’s four remaining P-8As are in advanced stages of production and are scheduled to be delivered in 2022.

Norway’s first P-8A is the 142th example of the type delivered. Other operators include the Indian navy, the Royal Australian Air Force, UK Royal Air Force and US Navy. Boeing says initial deliveries of the Poseidon to the Royal New Zealand Air Force, South Korean navy and German navy will take place in 2022, 2023 and 2024 respectively.

Indian start-up carrier Akasa Air has placed firm orders for 72 Boeing 737 Max aircraft including some for the higher- density Max 8-200.  The order was announced November 16 at the Dubai air show.

Plans for the carrier first emerged in October, as Akasa outlined its intention to begin flights in the summer of 2022.

Akasa chief executive Vinay Dube says: “We believe that the new 737 Max airplane will support our aim of running not just a cost-efficient, reliable and affordable airline, but also an environmentally friendly company.

“India is one of the fastest-growing aviation markets in the world with an unparalleled potential.  We are already witnessing a strong recovery in air travel and see decades of growth ahead of us.”

Dude is the former chief executive of Jet Airways, which operated Boeing 737 Max aircraft prior to its collapse two years ago.  SpiceJet is the only active Max operator in India.

While no specific breakdown has been given on how many of the 737-8s will be the higher density version, Boeing vice-president commercial marketing Darren Hulst said it would be a “significant number” of both.

The carrier says on November 16 that it changed its name, appointed its management team and plans to announce its schedule “soon”. It’s looking to replicate in Canada the low-cost model which has revolutionized air travel across Europe and the United States, offering low fares, flexibility and choice.

“We believe that there are people in Canada who can’t afford travel or travel as much as they would like to, and what to do is to make travel accessible to everyone in Canada,” chief executive Merren McArther said on November 17.

Lynx will launch operations with three Boeing Max 8, which McArther says will be delivered in the first quarter of 2022. The aircraft will have a single class configuration with 189 seats. The carrier hopes to grow to 46 jets in the next seven years.

McArther says the airline’s goal is not to grab market share from rival carriers. Rather, the company wants to tap into the still pent-up demand following the almost-two-year coronavirus crisis that kept travelers at home.

*Flybe takes delivery of its first De Havilland Canada Dash8-400 twin turboprop at its new Birmingham airport home. The aircraft is the first of the type leased from Nordic Aviation Capital. 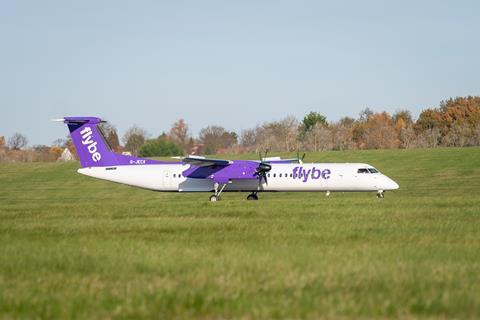 Air Transport Services Group, Inc., the world’s largest lessor of 767-300 converted freighters, has contracted with Boeing for the conversion of four aircraft to 767-300 Boeing Converted Freighters(BCF).

“Our continued confidence in the 767-300 platform, now coupled with the services and support of the OEM, reinforces our commitment to deliver best-in class reliable services to our customers,” said Mike Berger, chief commercial officer of ATSG. ”We’re proud to partner with Boeing as we expand our fleet to meet growing demand and look forward to future growth together.”

The 767-300BCF now has more than 100 orders and commitments around the globe, providing wide body converted freighter capability to meet market demand, and building on a record year for customer orders of Boeing’s family of freighters.

“We are honored that ATSG has decided to make to make the 767-300BCF an integral part of their fleet expansion strategy, supporting customers looking to capitalize on strong e-commerce demand,” said Jens Steinhagen, director of Boeing Converted Freighters. ”As the OEM, Boeing has the original design data, robust supply chains, and dependable delivery schedules that benefit BCF customer such as ATSG. With that OEM advantage, we stand ready to meet ATSG’s needs by bringing forward market-leading 767-300BCFs into its fleet.”

ATSG is a global leader in cargo leasing, operating a fleet of 106 Boeing aircraft, including more than ninety 767 converted freighter.

CMA CGM Second to Commit to A350 Freighter

French logistics firm CMA CGM Group has become the second customer for the new Airbus A350 freighter after signing a memorandum of understanding covering the purchase of four of the type. The aircraft will be operated by the group’s recently launched cargo unit CMA CGM Air Cargo.

The Commitment, which Airbus expects to be finalized soon, comes days after Air Lease placed the first provisional order for the type during the Dubai air show. Air Lease is taking seven A350Fs. 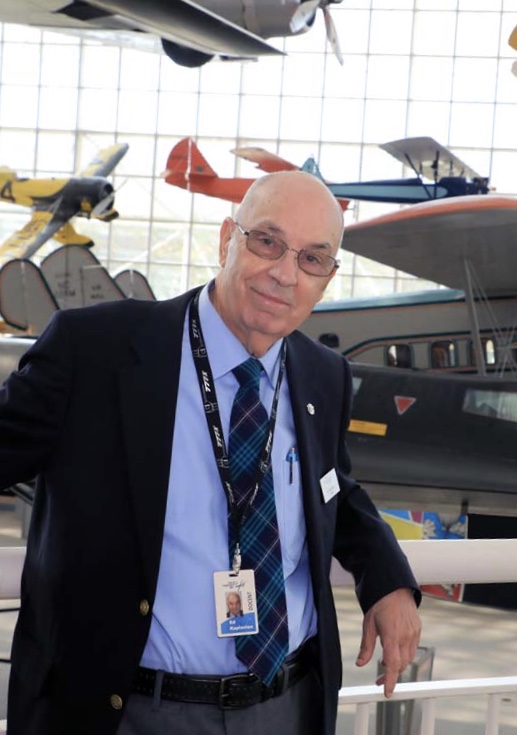